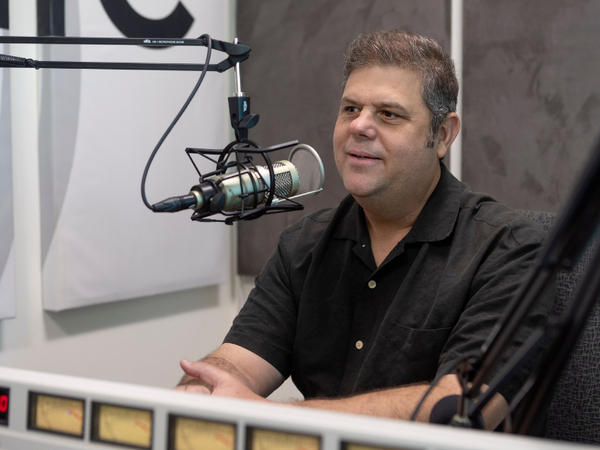 After a two-year plus hiatus due to the COVID-19 pandemic, Bob Gibson is back hosting “Catholic Sports View,” a weekly podcast that covers the Trinity League Catholic high school sports teams in Orange County and Los Angeles. In his lively interviews with coaches, athletic directors and athletes in the Trinity League each week, Gibson weaves Catholic values and beliefs into stories about teams and athletes.

Gibson grew up in Costa Mesa and has had a career in media. In 2014, he approached Ryan Lilyengren, the communications director at the Diocese of Orange at the time, about the idea of a radio show that combined sports and faith. Lilyengren was enthusiastic and by the following year, the funding was in place to make it happen.

“Catholic Sports View” began as a radio show in 2016 then stopped production in 2020 because of lockdowns for more than two years. But as the pandemic eased, Gibson was eager to restart it.

“So many coaches were asking me, ‘Where’s the show?’” he said. “Now that we’re back everyone is excited.”

The show returned as a podcast in the first week of October this year. Gibson covers a variety of topics, such as the shortage of game officials in high school sports and what schools can do about it. But what makes the podcast unique is how faith is discussed.

“I try to find the place where athletics meets faith,” said Gibson. “I bring it in as it pertains to the conversation. I don’t make faith the basis of the show, but I don’t shy away from it.”

Gibson is willing to dive into sensitive topics when appropriate.

“A player at one of the schools tragically took his own life, he said. “His parents agreed to be part of the show to discuss a foundation they had set up focusing on helping those with mental health needs.”

But the show intentionally stays away from controversies.

“There are enough outlets out there for that,” Gibson said. “We’re trying to promote athletes, and coaches and Catholic education.”

“I am glad that we are able to provide this kind of content on high school prep sports, especially since there is such a demand for it,” said Jim Governale, the engineer and radio program manager for “Catholic Sports View.”

Governale produces several other weekly shows for the Diocese, many that air on the local Relevant Radio stations. These include the “OC Catholic Radio Show” with Rick Howick, “Cathedral Square” with Fr. Christopher Smith, “Empowered by the Spirit” with Deacon Steve Greco, and “Sounds from the Sanctuary” with David Ball.

“I also assist in the production and providing studio recording time for a handful of partner ministry programs for an online channel called Spirit Filled Radio,” he said.

What are the ingredients of a successful podcast?

“For me, if a show host is passionate about his or her subject matter and they feature lively guests who have personal stories and testimonies, to share, we have a winning combination!” exclaimed Governale.

Gibson was the perfect person for this podcast. Not only is he at ease in media but he’s a long-term sports fan, so it’s fun for him to follow the teams of the Trinity League. He’s developed good relationships with everyone involved in Orange County high school teams.

“I’ve been doing this so long,” he said.

He also knows his listening audience.

“I know a lot of people keep up on the stories and scores—and now social media is a big tool now. There was barely internet when I started,” he said.

The relaunch of “Catholic Sports View” is going strong, due to Gibson’s upbeat personality and because the show demonstrates how faith and athletics are naturally connected.

“I think they really go hand in hand,” said Governale, who said he is grateful to hear from coaches and teachers who are dedicated helping young student athletes.

“I have always wanted to tell the stories of coaches and athletes as people, not just for their athletic accomplishments,” he said. “I think I’ve had the chance to do that with this program.”

Gibson added that he is happy to give his interviewees the chance to talk about their faith and how it shapes the kind of coach or athlete they are.

“The most common feedback I get after I interview someone is how much fun they had which makes me feel like I accomplished my goal.”